A great research thrust has been initiated the last decade in South African Universities to study the chemistry of South Africa’s medicinal plants with some exciting findings being made (Sobiecki, 2014). However, the cultural, i.e., the ethnomedical aspects of this plant use have often been neglected—see below for reasons proposed for this.

Yet, through my research I have shown that a great deal can be learnt about, for example, the mechanisms of psychoactive medicinal plant actions through studying and understanding the rituals employed in South African traditional medicine and healing (Sobiecki, 2012, 2014). Through bridging the cultural and ethnopharmacological-chemical studies of South African traditionally used plants will provide a more integrated and comprehensive understanding of how plant medicines work to heal the body and mind. For more on the ethnobotanical research aspect of South African plants see www.ethnobotany.co.za 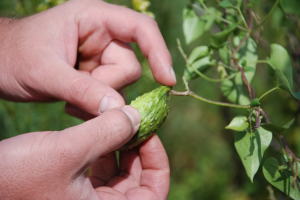 Pentarrhinum insipidum (Leswa-Sotho) an edible wild plant, the “cucumbers” of which are rich in minerals.

Cultural influences on the study of traditional medicine.

A number of interlinked factors have caused Africa and Southern Africa in particular to be lacking in the study of psychoactive plants. Some reasons postulated include: researcher bias concerning substance use (Winkelman and Dobkin de Rios 1989), a lack of attention by researchers to the region’s psychoactive flora (De Smet 1996), the overlooking of more subtle psychoactive effects of traditional plants medicines (Sobiecki 2008) and the loss of indigenous knowledge concerning psychoactive plant use due to acculturation. Another significant influence, especially relevant to South Africa, is the political history of the region and the immediate and continued conflict experienced with the arrival and meeting between the European colonialists and the Southern Bantu speaking people. Colonial beliefs constructed and framed African traditional healing practices and traditional medicine as primitive, unsophisticated and satanic, (Croucamp, 2001:1), which would have negative repercussions for the study of Southern African ethnomedicine practices (Sobiecki, 2014:4). After having attacked and subjugated the indigenous South African people, the apartheid system would cause a social rift between white and black people that would have obvious consequences not only in terms of social separation but also in terms of research.

Thus, together with the global stigma on substance use research there also existed a racist element in South African society that would predictably polarize race relations, ethnomedicine and western medicine practices, and skew and bias ethnobotanical research being generated then, by mostly white western scholars. This is evidenced from the clearly racist attitudes of a number of the early ethnologists researching South African traditional societies see (Croucamp, 2001) and the fact that the majority of ethnobotanical studies from South Africa in the last three decades have focused on medicinal plants (16 %) and food plants (20 %), with only a few (7 %) relating to the category ‘Magic, ritual and customs’ (Liengme 1983) It is this last category that appears to be rich in plant species with reported psychoactive uses and effects (Sobiecki 2008, 2012), and which deserves much more thorough attention and research. Similar cultural prejudices have occurred elsewhere in the world that has negatively affected our ability to appreciate traditional cultures and their systems of living.

A species of Silene, the roots of which are used to clean the body and tonify the mind

Western and traditional medicine each face issues of toxicity of medicines and malpractice.

Other common issues both systems of medicine face include:

Traditional medicine is effective in many cases and this has been validated from clinical or laboratory studies. Despite its effectiveness there is a need for standardization of traditional medicines products being sold on the shelves. This would require good manufacturing practices etc and the collaboration from interested traditional healers. Traditional means of preparing and dispensing medicinal plants will always have a place and the challenge is to meet traditional healers halfway through professionalizing their registration while allowing for old and new practices to each have their time and place.  In either case, word of mouth reports of experience and effectiveness will probably be the best way to find reliable traditional healer now and into the future.

While traditional healing in South Africa faces the problem of professionalism in many cases, western medicine appears to often have a problem in providing a truly holistic framework (including addressing the deeper social and spiritual aspects of the patient) to its treatment practice through GP’s. One reason explained by a doctor to me for this is the need to see a great number of people. Yet, revitalization is occurring slowly in western medicine where doctors are gearing towards more integrative and holistic approaches to healing, and not to be forgotten, from western medicine has come great humanitarian causes such as Doctors Without Borders organization. In usual daily life, it must however still remain our own responsibility to heal ourselves through educating ourselves on holistic medicine (whole food nutrition, the uses of herbs, and health promoting activities) and to seek holistic medicine to help us with healing chronic conditions and boosting our well-being. This is where good holistic medicine doctors (South African, Ayurvedic, TCM traditional healers etc) can play an important role; they can provide counseling, ritual and medicines to provide curative benefit while also allaying fears, all of which requires that they are properly trained.

In both systems of western and traditional medicine it really depends on the individual doctor’s ability to deliver care and responsible medicine and treatments to their patients and to do no harm. The dangerous over-prescription of tranquilizers by general practitioners is one example of a worrying trend in western medicine that is seeing many patients becoming addicted to these drugs.

Some of these issues outlined above are studied in more depth in the following paper: Intersection of Culture and Science in South African traditional Medicine.(PDF) 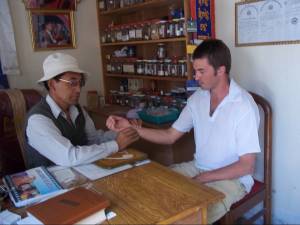